You are here: Home / In The News 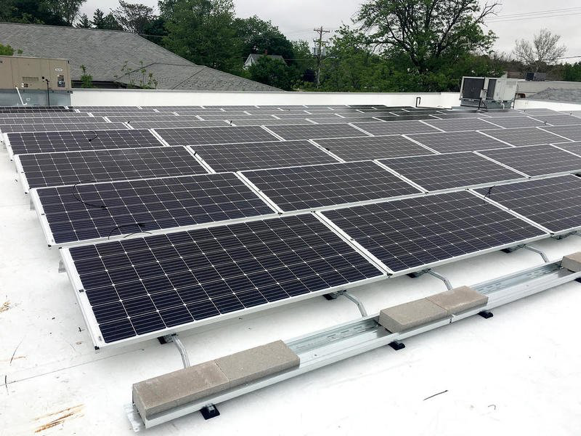 GENEVA – Riverbank Laboratories Inc. in Geneva installed a solar panel system that is expected to provide nearly all of the company’s electricity needs.

Company owner and president, Robert Swanson, said it was a step in the right direction for the environment. “Every day, we are saving trees and keeping C02 emissions from going into the air – and it’s renewable energy,” Swanson said. “It’s not using coal or oil or natural gas that has a finite quantity.”

Carbon emissions from burning fossil fuels raise global temperatures by trapping solar energy in the atmosphere, according to the National Academy of Sciences, Engineering and Medicine website, nasonline.org.

Since the panels went live May 31, they have produced enough energy to power 11,600 light bulbs for a day and saved 6,000 pounds of carbon dioxide from being emitted – the equivalent of planting 150 trees – Swanson said.

“It’s the right thing to do, reducing our carbon footprint,” Swanson said. “Our customers appreciate our commitment to the environment.”

The system is designed to produce more electricity than will be used in the longer, sunnier spring and summer days, Swanson said. Excess power generated by the solar panels will go back to the grid for use by others.

“We get credit for that shared power on cloudy days when we draw our electricity from the grid,” Swanson said. “Over the course of a year, we expect to generate 97 percent of our electrical power needs via our solar panels.”

Mike Nicolosi, owner of Rethink Electric, said he has worked in the solar industry for 11 years and started his company three years ago.

“They are stepping out and showing, ‘Why not get power from the sun than from coal or a nuclear power plant?’” Nicolosi said of Riverbank Labs. “With solar power, there is no turbine or machine or anything turning or making smoke. You are eliminating the amount of CO2. That is a feel-good thing.”